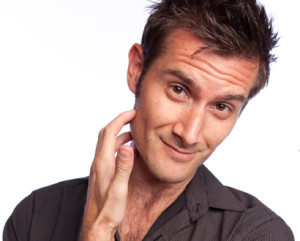 Meet Mark Trenwith, a super funny guy and one of Balloonaversal’s popular choices for balloon twisting entertainment for kids parties and events.

Not only is Mark a talented balloon twister, he’s an accomplished stand up comedian and a talented actor.

Calling himself “a naturally weird guy”, Mark got into the comedy scene at an early age. Now with over 10 years of stand-up comedy experience, he is renown for his stunning use of video and digital technology as the highlights of his various shows.

“The various multimedia Trenwith uses are highlights… one of the most hilarious things I’ve seen.”

Mark’s energetic, easy going style as an actor has placed him in many popular film and TV projects, such as Peaches with Hugo Weaving, Like It Is, and ABCTV’s Being Me as “Bounce-back Man.”

Today, Mark regularly performs for sellout crowds at the Adelaide Fringe, Edinburgh Fringe, and Melbourne Comedy Festival. His most popular shows include Ghost Sharks, which won the Moosehead Award.

But Mark has a special place in his heart for children’s entertainment, appearing in shows such as Punchline, Ben Ten Live, and Thomas the Tank Engine and Friends and his latest – the zany kids’ comedy creation, Mr. Snot Bottom.

So when you’re in the market for a balloon twister for your child’s birthday party or for corporate and event entertainment, choose a company who have team members with quantifiable proven people and entertainment experience.

Your party or event will be so much more successful and fun filled than if you just hire one of the many ‘cheap’ part time balloon twisters currently flooding the entertainment market.  Anyone can go to YouTube and follow the millions of ‘how-tos’ on any subject, but it 9 times out of 10 their lack of experience and professionalism leaves many buyers in a state of regret.

Balloonaversal’s team members have a reputation for being well spoken, well mannered and well presented with a professional and mature approach in their communication and work ethics.

For more information on hiring a balloon twister for children’s parties click here and for event entertainment go here.  Or Call 8669 1303